Steve Rostedt and Glauber de Oliveira Costa have just posted initial patches for a 64-bit (x86-64) version of lguest. Looks like the next steps will be to consolidate the code into common and per-arch components. Initial feedback from Rusty seems good.

I’ve been working on converting lguest over to the new clockevent and dyntick frameworks. (Thomas Gleixner’s OLS paper, Hrtimers and Beyond: Transforming the Linux Time Subsystems, is also a great reference on the topic).

Tickless operation is particularly useful for virtual machines, allowing clock events (for timers etc.) to be programmed on demand, with events only being delivered to VMs as required, rather than say, generating a synthetic tick stream for each VM. (Or in the case of lguest, switching out of each guest on each host clock tick). It’ll be interesting to re-run the networking benchmarks again with tickless & high-resolution timer support.

There may be some scope to consolidate common clock code between several HV projects (Xen & lguest have nearly identical clockevent code in progress), although it’s not entirely clear yet how much can be usefully gained, as the new clock APIs make the client code fairly simple.

Máirín Duffy has created a new logo for lguest (also now known as the puppyvisor): 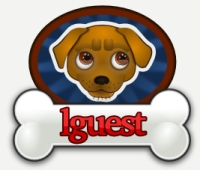 Via Val Henson: some hilarious slides from a talk on network protocols by Radia Perlman. I’m sad to say I haven’t seen Radia give a talk as yet.

The SELinux Symposium is on next week!