I’m back now, after a truly wonderful time in Bangalore. It seems to me that FOSS.IN/2005 was a major success by several measures: number of delegates, speakers, tutorials, BoFS, talks; the amount of local buzz (overshadowing an official IT industry conference to the point where the government sent people to see what was going on), and the global reach. This conference had the best atmosphere of any that I’d attended (it’s tough to beat something like LCA in Perth), and it was genuinely enjoyable. Apart from all of the official talks and events, if you looked around the grounds (many photos are linked from the web site), you saw something very important: people in small groups, talking. Often passionate discussions around all kinds of technical and cultural issues relating to FOSS. It felt like the kind of excitement experienced in the early days of Linux. The possibilities, the challenges, the potential. And most importantly, the fun.

There was much talk of how India needed to learn about FOSS culture. Currently, there are a lot of device driver developers, for example, who may not have internet access at home and have severe limitations imposed by their employers on how much they can contribute openly. These kinds of issues are problematic, for now. But after thinking more generally during the trip back, I’ve come to see that this FOSS cultural exchange needs to be bi-directional. Not just people from established western free software communities coming in and brain dumping. This is of course important, but only half the picture.

As witnessed by the fact that this conference exists at all, unifying LUGs from across such a vast country, India already has significant FOSS culture. Some aspects of it are uniquely Indian. The general FOSS community has a lot to learn from India. Similarly, there are strong FOSS communities in Japan, often different in nature to those in the west. The incorporation of USAGI (IPv6 and IPSec) technology into the kernel is an existing example of how these sometimes separate FOSS cultures can successfully engage with each other.

I think this is one of the exciting challenges for FOSS in the near and long term future: figuring out how to engage, foster and learn from FOSS communities outside of the traditional western-oriented core. And like countries where many cultures exist together successfully, the global FOSS community stands to benefit from the diversity, and in fact to significantly evolve because of it.

I’d strongly recommend international FOSS developers consider submitting talks for the next conference (I gather there will be one), as it’s a) a blast; b) a great opportunity to spread your knowledge widely and; c) a great forum for learning about FOSS in a wider cultural context.

Anyway, enough rambling. Here are a few more photos (I’ll try and put more up via Gallery or something eventually). 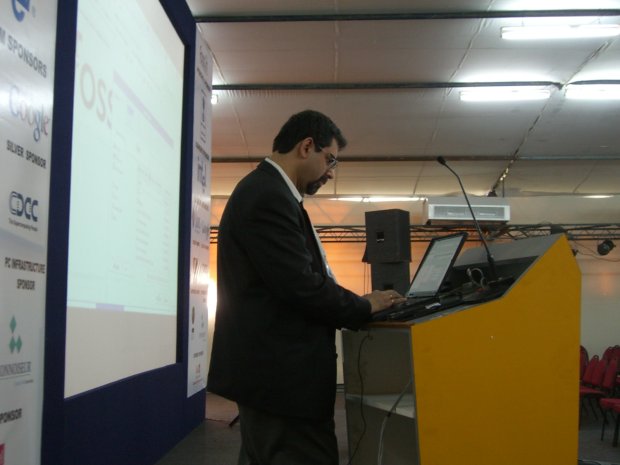 Atul Chitnis, whose determination and vision made it happen. 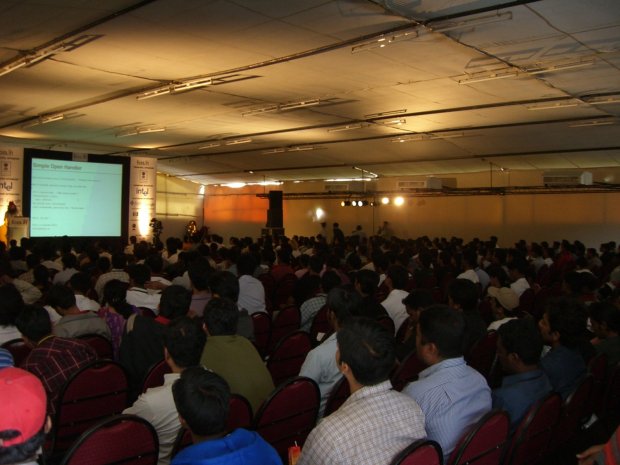 Alan Cox’s kernel hacking talk on the last day, with the main hall packed and delegates intensely focused. This might be a record for the number of people attending a kernel hacking talk. Certainly for people actually taking notice of such a talk. Jon Corbet and Harald Welte also packed out the hall that day with talks on a similar level. 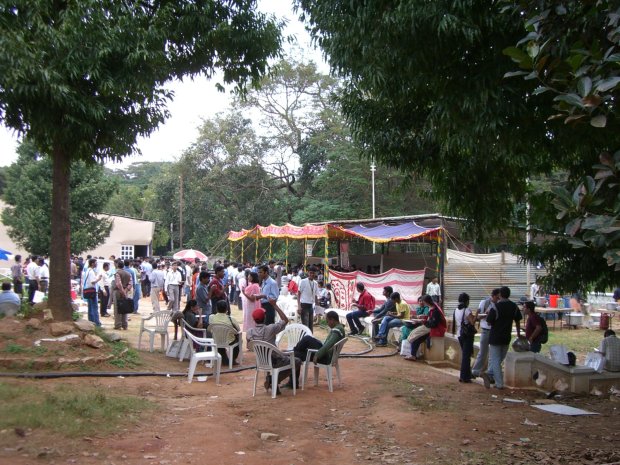 All-day food BoF adjoining the kitchens. This is where a lot of the real action happened each day.